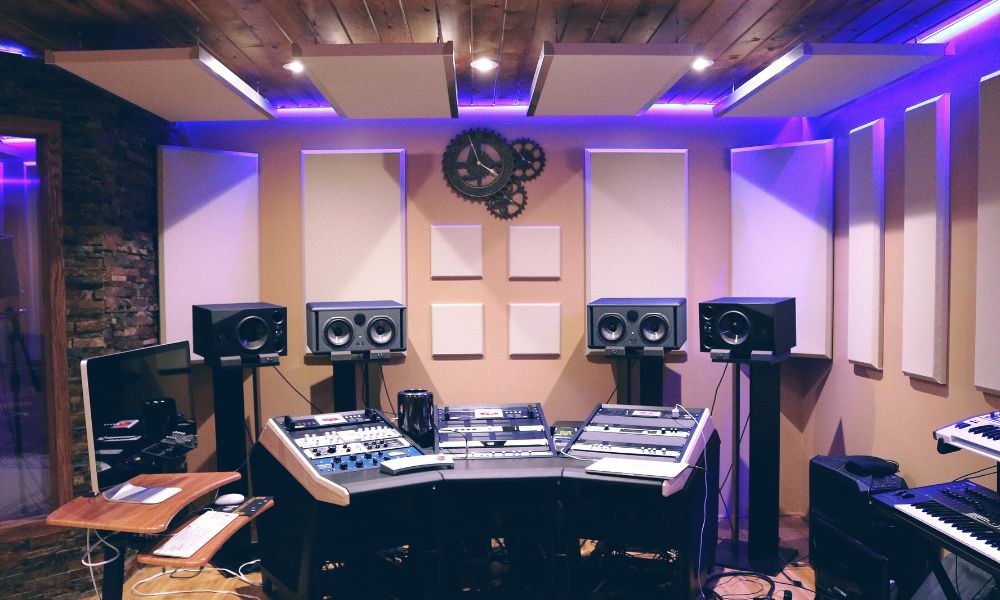 When it comes to recording songs or music for singers or musicians, choosing the best audio recording studio in India is what one would look for in order to get the job done, and in a professional manner.

Audio recording studios, or simply, recording studios, are a backbone for any singer/musician who wants to have their songs/music recorded, mixed, mastered, produced, and finally, released for their audiences and on a wider scope. Be it instrumental or vocal recording, such facilities are a go-to destination for both aspiring and professional artists/musicians who want to make a name for themselves in the music industry, not just in India, but across the sub-continent, as well.

Why Do You Need a Recording Studio?

Well, if you are starting out as an individual singer/musician, and are keen on pursuing your career to reach a new level, you will require a lot of things in this area. For instance, singers/musicians/bands will require a facility with the necessary equipment and amenities to work on their musical project. They will also require instrumentalists who play various musical instruments and vocalists to accompany their songs and/or musical compositions. Most importantly, singers/musicians will need a team of professional sound engineers, technicians, etc., who are responsible for operating the entire process – right from recording tracks to making them release-ready (and everything else in between).

Thus, understanding the significance of recording studios in India, we’ll move on to find out some of the best studios that offer all of these services and facilities to singers/musicians in the country.

Below, we are going to include a non-exhaustive list (in alphabetical order) of the top audio recording studios that are based in India and which are great options for beginners and professionals who want to record sessions for their music projects.

20dB Soundstudios is a very famous recording studio based in Chennai. The facility offers services to clients, like recording, mixing, and mastering. They also provide online services for the same and the sessions can be booked online via their website. In addition to this, the founders and members of the studio have also launched internship and training programs for aspiring audio engineers.

The facility consists of a mixing room and it is known as the “20dB Black” Mastering Suite, although the room is not in black color. The room is spacious and equipped with modern gears to carry out the needed operations for their clients. Their team of sound engineers is experts and adept in the field.

Audioneers is a well-known recording studio and production company and it is located in Noida, Uttar Pradesh. The facility is mainly focused on composition, recording, and production, and is led by the professional music producer Celjo John, who is also the sound designer and sound engineer at the studio.

Aura Studios is also a popular recording studio located in Chennai, Tamil Nadu. The facility provides recording, mixing, mastering, and dubbing services to clients. Their recording room is spacious, well-designed, and consists of three stages: a stereo recording and mix stage with a booth for live recordings and voiceovers, a Dolby 7.1.4 Atmos surround mix suite and a composing suite with a compact booth, and an ADR/ Voice dub and Foley stages at the ground floor, with two control rooms and two booths. Their studios are also equipped with modern equipment, hardware, and software to provide a better experience during the sessions and ambiance at their facility.

Their team of professional sound engineers assists aspiring singers/musicians while recording their sessions at the studio.

BOING is one of most the popular recording studios in India and it is located in the city of Mumbai, Maharashtra. The studio has catered to advertising and music production for several years. Their facility provides two studios that are spacious and equipped with modern equipment, hardware, and software. The team of professional engineers is also great to work with.

Both of their recording rooms provide plenty of space and are ideal for tracking, live recording, mixing, and mastering for TVCs, film songs, scores, and music albums.

Ferris Wheel Studios is a popular commercial recording and music production studio based in Gurugram, India. The recording facility provides isolated amp rooms to singers/musicians for recording purposes among other things. They also offer a lot of other essential services and modern equipment to produce high-quality audio with no outside disturbance.

The recording studio is run by a team of professionals and their facility provides comfortable recording rooms (or booths), so singers/musicians can focus better.

Gray Spark Audio is a popular recording studio located in Pune. The facility provides all the needed services and equipment to clients for their music production and audio post-production operations and management. Their team of experienced sound engineers has worked on several projects, which include advertisements, jingles, live sound, film scores, producing indie music, etc.

The facility provides two spacious rooms for recording sessions that are equipped with high-quality amps and microphones and modern hardware and software to produce better sound and prevent noise.

Island City Studios is a recording studio located in Mumbai. The facility consists of two studios, The Press (Studio A), which is the flagship studio, and The Bay (Studio B) which is mainly used for dubbing purposes. The team of audio engineers are talented professionals and assist singers, and musicians with their recording sessions and post-production management.

The Press (Studio A) studio is their largest recording room with the best-equipped control room for all recording, mixing, and mastering operations. The Bay (Studio B) studio is their cozy yet power-packed studio for all post-production and smaller recording requirements.

Krimson Avenue Studios is a popular recording studio that has been around since 2006 and is located in Chennai. The facility provides services, like audio recording, music production, mixing and mastering, ADR (dubbing), and Foley to clients.

The facility is equipped with all the essential high-quality audio equipment, hardware, and software for the best sound experience. The unit also introduced the Krimson Sound Labs, which is a music school and consists of trained faculties.

The facilities are equipped with the latest equipment, hardware, and software which provide the best experience to artists/musicians that come here for recording their music sessions and post-production management. The team of sound engineers at all six studios are professionals and are known to be behind the success of several popular singers and musicians of today.

10. Panchathan Record Inn and AM Studios

Panchathan Record Inn and AM Studios was founded by India’s renowned singer and musician A. R. Rahman and is located in Chennai. The studio is situated in close proximity to Rahman’s home and is considered one of the most developed studios in Asia. The facility is designed to provide a larger space and is equipped with modern and advanced equipment, including 3D sound mixing capabilities, to allow artists/musicians to record and produce their tracks with the best tools, assistance, and experience.

The facility consists of a team of prominent sound engineers from the South film and music industry.

Parekh Recording Centre is a recording studio located in Bengaluru. The studio may look simple but it is well-equipped and the professional sound engineers can assist artists/musicians with their audio recording, mixing, dubbing, voice-over, mastering, and production operations effectively. Their facility also caters to short films and feature films and provides voice-over artists, voice dubbing, etc. services to clients.

Plug ‘N’ Play Studios is a popular recording studio located in New Delhi. The facility has been providing services, like arranging music, composing, recording, mixing, live sound, live gigs recording, etc. to clients for over a decade. The facility provides two spacious rooms that are equipped with plenty of modern equipment, hardware, and software needed for recording sessions.

The studio does not own any kind of website. They, however, can be reached via their Facebook and Instagram social media platforms in order to book sessions and avail of other services that they provide to clients.

Prasad Studios is another popular recording studio located in Hyderabad. The studio is a division of Prasad Group, which also consist of the Prasad Film Labs, a motion picture and post-production studio that is also known for producing more than 150 South and Bollywood films. Their production units are located in several cities in India, such as Kolkata, Mumbai, Bengaluru, etc., and a few locations outside India, as well.

The facility provides spacious rooms, well-equipped equipment, hardware, and software for recording sessions at their studio. They also offer a load of services for film-making, too.

Their studio is large enough and purpose-built to accommodate dubbing, string sessions, and music production projects.

Shimmr Studios is a recording and music production studio which is located in Chennai. The facility was founded by a popular music producer Ashwin Vinayagamoorthy. The services provided to clients are music recording, editing, mixing, mastering, and production. Their recording rooms are designed to be spacious and also equipped with modern analog and digital equipment, hardware, and software to create the best sound and experience.

Their studio consists of four different suites, namely Lounge, Main Suite, Recording Suite, and Preview Suite, and their team of professional sound designers is great people to work with.

Sound & Vision India is a popular recording studio with its head office located in Mumbai. Their facilities are situated in several cities, such as Bengaluru, Kochi, Chennai, Hyderabad, Kolkata, and Delhi. They provide a wide array of services to clients, a few of which include dubbing, subtitling, access services, voice casting, translation, song recording, and mixing for movies, web series, TV shows, documentaries, songs, jingles, TVC’s and radio spots on a turnkey basis.

Their facilities are spacious and also well-equipped with modern equipment needed for recording and mixing operations.

Studio NYSA is a popular music recording studio that was founded by the Sahara India Pariwar group and is located in Mumbai. The facility renders services for recording audio, editing, mixing, and mastering to clients and professional singers/musicians.

Their studio is spacious and equipped with the latest mixing console and recording technologies with a combination of both analog and digital equipment to deliver the best experience throughout the sessions. Their team of audio engineers consists of well-trained and experienced professionals who have worked with the best music directors and directors in the Indian film industry.

Woodstock Studios is a recording studio located in Mumbai. The studio caters to in-house music production and audio post-production services in India. The facility is geared with the latest professional audio tools and consists of a well-equipped mixing room with industry-leading mixing tools, and a capacious and well sound-proofed dubbing room for a better experience.

Yash Raj Studios is a unit of Bollywood’s top film-making company, Yash Raj Films, which is located in Mumbai. The production house consists of several integrated studios and one of these divisions is the YRF Studios housing the Audio Wing unit. Their Audio Wing facility is said to be very advanced and meets the need for audio and video recording and post-production operations.

Their recording studios are spacious and equipped with modern equipment, hardware, and software to deliver the best quality and experience.

Audio recording studios in India create a way for both new and professional singers/musicians to record and produce their creations with the best quality sound, so even their audience can listen and enjoy them anywhere.